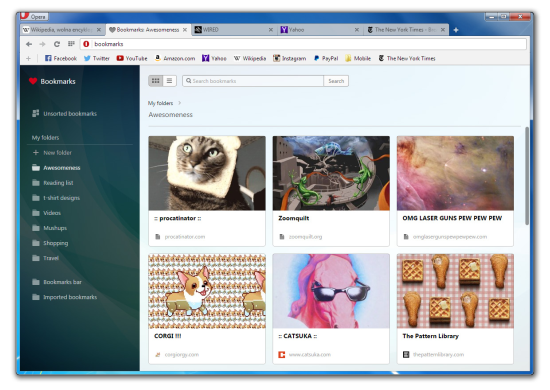 END_OF_DOCUMENT_TOKEN_TO_BE_REPLACED

Blackberry Should Put Opera Browser Into Their Devices

Most of my friends who own Blackberry will also install Opera Mini into their gadget. They know that Blackberry devices already equiped with web browser but it failed to fit my friends’ needs. Too bad, there’s no official Opera Mini for Blackberry yet.

The Opera Team has this initiative to build Opera Mini specified for Blackberry devices but the RIM doesn’t want it.

I think Blackberry should considerring to put Opera Mini or Opera Mobile into their devices. It’s cheaper than create their own browser. Hire the best for the job.

Simply hire Mario and Luigi to fix your broken plumb instead of fixing it yourself.

Here is a collections of notes I found everywhere on the Net, about Safari’s new features. Quotes below are taken from a discussion entitled Deceptive Marketing on Safari 4:

Here are some other thoughts, with original source (link) included.

Apple’s Safari 4 and some facts

Apple has just released their beta version of Safari 4 with some improvement and featured with some new inventions,  while in fact is that another browser has been using Safari’s new features since a long time ago.

Just to mention a few: in Safari 4, there is Top Sites which is equivalent to Speed Dial in Opera, also full page zoom that Opera has been using since 1996.

And hey, they claim that Safari 4 is the first browser that implement RSS reader feature!

For further facts, you can read fantastic article from Dustin Wilson, The Great Feature Train Robbery.

Why Carakan? Based on their FAQ page, carakan is real javanese letter/script. So the engine named Carakan will be the true javascript, or the purest javascript engine. Sound cool.

I and Agung were curious that the name carakan was from Bruce Lawson. We read his blog post about proper java script, there is a picture of original javanese alphabet there. Well, no matter who get the idea for the name, I proud that Opera named their javascript engine as carakan.

Peek at your browser detection script

As Opera released the first two digit version of browser in the world, web developers should look at their browser detection script. The scripts are using regex code that will parse the user agent signature provided by every browsers. Most of them are only capable to detect one digit of browser version, thus Opera 10 mostly would be detected as Opera 1.

Later on, it’s just one day before 2009, I would like to say happy new year to all of you. Hopefuly the year will be great for us developer, and the greatest hope I have is to see Internet Explorer to be more developer friendly as it was known as best developer’s nightmare.

Yesterday I downloaded Opera 9.6 for my ZenWalk linux at the first day release. It’s interesting because in the past I have to wait for 1-2 days before the tar ball is ready for my linux distro. Can’t wait any longer, I installed it on my machine. My first impression was there were seem no improvement at all, unless the Opera scroll marker.

Then I took a look at its email client, I was surprised because there were 5000+ messages in the trash! I read some messages randomly and found that the messages were the orphaned mail, messages that lost in the past due to Opera crash.

In the previous version of Opera, I have my mail crashed a few times and I have to create new email account and lost my downloaded messages. Then I see them there, inside the trash. So I quickly empty the trash, Opera run faster than before. Great!

Now I feel that this is the most stable Opera release for Linux. And I love it so! 😀

Just a few hours ago, I’ve downloaded Google Chrome and give it a try using Windows XP running on VirtualBox. Interesting browser, fast and very user friendly. But I got a difficulty when I need to change the language into English (the default was set into Bahasa Indonesia, with funny translation).

I was thinking that this is a hybrid of Opera and Firefox, adopting the good parts and patch their leak. For example, something like Paste and Go is a familiar thing in Opera. Also the thumbnail for most visited pages remind me about Speed Dial in Opera.

I love the task manager, incognito mode, and the way they use tabs. Very handy and visually appealing.

But I think this browser miss some features: option to enable and disable stylesheet and option to display or not display image from web page. Menu to enable or disable javascript or plugin is also missing. But I can say this is very good for the first beta release 🙂

Google Chrome, seem to be a promising browser

Using Webkit engine, Google is going to create a browser with a different approach. They say that all current browsers are old style while current people need a new browser that can adopt the new web generation.

For me, the best part is the usage of memory alocation for each tab. It’s very cool because I do hate to close browser with entire tabs just because one single mistake on a single tab. Please take a look at the comic to see what this browser would look like. Too bad, Windows version will be released first.

Midori is a brand new web browser built using webkits and still on its heavy development to become a reliable web browser for daily uses.

Based on information from Midori’s official page, there are several features provided:

My own review is this browser NOT good enough for my daily browsing activities but looks very promising in the future. Go ahead Midori! 🙂